So, I haven't been able to work on my comic cause overtime and working on weekends, but I"m trying my best to get my next one out.

But I wanted to make a quick post to say that the Season Finale was (as all other finales) AWESOME!!!

I absolutely loved the intensity of the conflict; I was literally on the edge of my seat when Twilight and Spike first returned to the present and Applejack informed them of the war against King Sombra and the Crystal Empire. I had such a Lord of the Rings feeling during the battle, and I really liked how Princess Celestia actually showed how reliable she really can be, despite how useless the fans make her out to be.

When Twilight and Spike returned back to the past to prevent Starlight Glimmer from stopping the Sonic Rainboom, things really began to kick in, especially when they returned to the present to find that Queen Chrysalis and her Changelings took over Equestria.

At this part, I liked the role Zecora played, and the grim situation that Equestria was in.
"Race to the map while we hold off their attack.
Stop Starlight and put the whole world back on track!"
Her intense determination and bravery was a nice side of her that I liked to see.

As the show went on, it felt like amazing fan service as they showed the different villains every time they returned to the past. I remember being extremely excited when I realized that in one of the alternate timelines they ended up in was an Equestria where Nightmare Moon was in control.

Okay, so basically, though the plot I liked, I loved the "return" of their previous villains (Discord, Tirek, and I was surprised by the Flim Flam Brothers having such an impact in one of the timelines), and seeing them again, even briefly, made me excited. I felt like if they had spent more time in each alternate world, it could've been a three part episode.

I understand why people are saying that some parts felt rushed (such as Starlight's reformation), but to be honest, I expected that, since whenever they defeat the villain or they get reformed, it always happens quickly. I would have like it, though, if the writers gave Starlight more time before she was reformed.

In the end though, the finale as a whole was really captivating, and the song at the end, along with this final shot 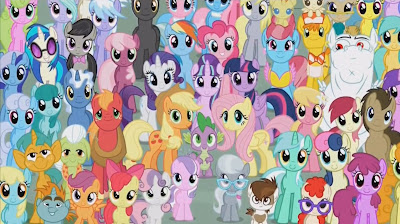 practically sealed the deal for me; it's definitely one of the top 5 season finales of My Little Pony: Friendship is Magic. (See what I did there?)

Yeah, I'm not the best writer; I just wrote down what I liked about the episodes (which was pretty much everything), and I'm always amazed by how the writers can one-up the previous finale.
I can't decide which one of the finale is "the best," but I think we can agree that each one of them are spectacular in their own way.

Also, I'll leave this here. Just a random meme I made.
Twilight can be persuasive ;) 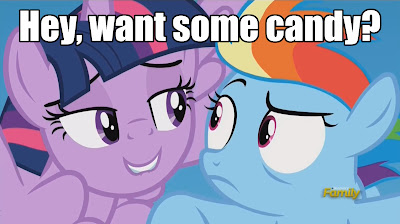 Posted by Unknown at 9:32 PM No comments:

I haven't had much time to work on another comic, but here is one for now. Been working overtime, so I barely even have time to sleep lol.

Also, I've been using Photoshop, but I might switch over to Inkscape as suggested by OFC_Operator.

Anyways, enjoy this one. :)

Posted by Unknown at 6:18 PM No comments:

Hello, everypony! I'm starting this blog as a hobby in my spare time. I'm a big fan of the Princess of the Night, and I wanted to contribute to the My Little Pony fandom, so I decided to make this blog. Welcome to Princess Luna's Dream Diary! 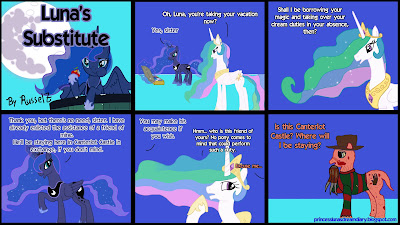 My first comic attempt. Hope you enjoy. Happy Friday!
Posted by Unknown at 9:51 PM No comments: